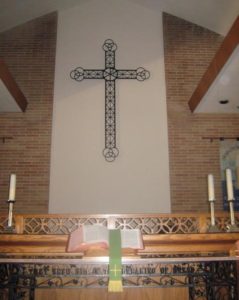 The cross has long been a meaningful symbol to the Christians.  In 1957-58 when the sanctuary was being constructed, Pastor Henry Tuttle designed the cross we see today.  The tall vertical of the cross reminds us of the relationship between God and humankind; the embracing horizontal arms call to mind our relationship and responsibility to our sisters and brothers here and around the world.  The budded or trefoil ends represent the eternal Holy Trinity.  The circles at the joining of the segments of the cross frames the Chi (large X shape) Rho (Elongated P).  These two Greek letters are the beginning of the name of Christ.  Also within the circle are the Alpha and Omega, first and last letters in the Greek Alphabet symbolizing Christ's eternal divinity (Rev. 1:11).  The lattice construction illustrates our interconnectedness.  Ours is an empty cross to celebrate a risen Christ.

You Are Welcome Here